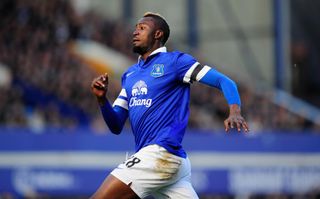 The rangy Ivorian joined on loan from the French outfit in January and scored in his debut - a 3-1 win over Swansea City in the FA Cup fourth round on February 16.

However, Traore injured his hamstring in the warm-up of Everton's next game, away at Chelsea, and has not featured since.

Despite the forward's injury problems, Martinez is keen to discuss another deal for the 23-year-old next term.

"(His future) is something we're going to discuss in the summer. He's quite unique in what he brings and he's different to what we've got.

"It's a conversation we need to have. I know Lacina is frustrated not to have played more minutes and it's something we're looking into.

"We need to speak to his parent club and see what their thoughts are."

Martinez, when asked about speculation linking the club with possible moves for Manchester United pair Tom Cleverley and Danny Welbeck, was quick to brush aside any such talk.

"Normally the crazy rumours start in the window," he said. "There's three games to go, probably the most exciting end to our season, and we're talking about possible targets. There's nothing to mention.

"What there is to mention is we'll try and use the window to try to be stronger in terms of the squad.

"We'll look at all the players available and the possibilities that we need but now the only thing that matters is Southampton (on Saturday)."