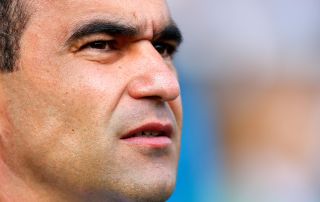 The Spaniard, who saw his side register a 2-1 extra-time victory over Stevenage in the League Cup on Wednesday, has grown increasingly frustrated with speculation surrounding the futures of key duo Leighton Baines and Marouane Fellaini.

Everton are reported to have turned down a £28million bid for the pair from Manchester United, with the club confirming that an offer for two unnamed players had been rejected as "derisory and insulting".

Martinez insisted that the proliferation of transfer speculation is having a negative impact on the English game, and called for more to be done to safeguard teams in the future.

"It is getting a little bit too much at the moment," he said.

"Not just here, but up and down the leagues at every dressing room.

On the possibility of adding to his own squad before the September 2 transfer deadline, he added: "From the first day I said we were pleased we got four players in really early.

"They are settled and part of the squad. We don't stop looking for new faces, who can fit in around the dressing room, but we don't want it to be forced.

"We are trying to bring players in and we'll keep trying to do that until the deadline."

The 40-year-old was also pleased by Ross Barkley's call up to the England national team.

The midfielder has had an impressive start to the season, but Martinez encouraged the 19-year-old to remain focused on developing his talent at Everton.

"It's really good, it's a terrific reward," he continued. "Ross has got great potential. It's really pleasing he got the call from the senior side, but Ross is the first to understand he's still in the middle of that development period.

"He knows his role is with the Under-21 side at moment, and he has to keep developing at club level.

"It's a nice reward for Ross, but it doesn't change his role too much."

Fellaini scored the winner against League One Stevenage, with a trip to Fulham in store for Everton in round three.