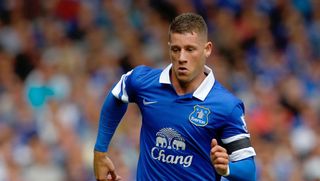 The 19-year-old has come to prominence in the Premier League this season with a series of fine displays, after impressing in loan spells at Sheffield Wednesday and Leeds United last term.

His fine form earned him a call up to England's squad for their FIFA World Cup qualifiers against Moldova and Ukraine, making his international bow in the 4-0 win over the former.

Barkley was also included in the squad for the recent clashes with Montenegro and Poland, but did not feature.

The teenager was substituted late in Everton's 2-1 win over Hull City on Saturday, and Martinez has warned that the midfielder may have to sit out games entirely to preserve his fitness.

"When you detect fatigue you need to give him a rest and leave him out completely," said Martinez.

"A bigger problem than physical fatigue is mental fatigue. He is only 19 and can cope with anything from a physical point of view.

"Going away with England, wanting to get in the winning mentality of the group, means the whole country is watching you.

"You need to understand that is draining at times and we saw that against Hull.

"I couldn't be happier that he takes everything in his stride. That shows he is a mature boy and will never change the way he is.

"You could say the England call-up is a little bit early but the England manager has looked after him in that respect.

"He hasn't used Ross as the saviour or man who will win the game for England.

"What he has given him is a little bit of an insight that if he grows as a player at Everton he can go to the England camp and not feel inexperienced. I think it was a very good way of managing him."