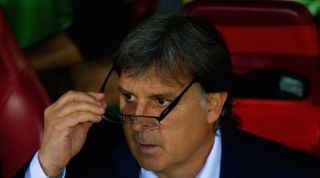 The defending La Liga champions looked set to slump to a fourth successive loss in all competitions on Sunday after Aritz Aduriz's 50th-minute opener at Camp Nou.

However, goals from Pedro and Messi with just under 20 minutes to go ultimately saw Barca salvage a victory that keeps the club's title hopes alive.

Barca are back within four points of leaders Atletico Madrid, but Martino conceded that he thought their chance to get a share of the spoils against Athletic had passed after missing several clear-cut chances.

"At one point I thought it wasn't to be, we had so many chances and didn't score," he said.

"But we kept on working. The players showed courage.

"If you create so many chances, you don't win by chance. If we play like we did, it's easier to win than to lose.

"I was happy Messi scored the winner. He doesn't reply (to criticism) in the press; he does his talking on the pitch."

Reports surfaced after Wednesday's Copa del Rey final defeat to Real Madrid that the Argentinian coach and Alexis Sanchez had clashed behind the scenes, but Martino has dismissed the speculation.

"He (Sanchez) joked in training yesterday (on Saturday) saying we had fallen out," he added.

"I didn't know what he was talking about."