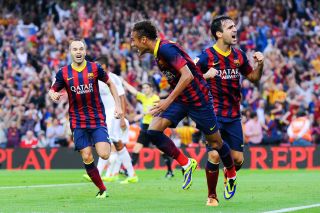 The Catalan giants secured bragging rights over their bitter rivals as goals at Camp Nou from Neymar and substitute Alexis Sanchez gave them a two-goal cushion before Jese Rodriguez notched a consolation in injury time.

That result leaves the reigning Liga champions six points clear of Carlo Ancelotti's side and four ahead of Atletico Madrid, who play on Sunday.

But Martino feels while the victory will help his players' confidence, the six-point gap over Real means nothing at this stage of the season.

"Six points difference? The win is good for how we feel, it's not so important from a mathematical point of view," he said.

"There is still a long way to go and I'm still putting Atletico as one of the contenders."

Ancelotti was incensed by two penalty claims that were waved during the game, the first for what he considered a handball by Adriano, and the second when Javier Mascherano pushed Cristiano Ronaldo over inside the area.

But Martino refused to be drawn on the argument, adding: "I'm not going to talk about the referee or what Ancelotti may have said about him."

With Barcelona one goal to the good, Real pushed for the equaliser, forcing Martino to introduce Alexis and Alex Song for Cesc Fabregas and Andres Iniesta.

And Martino believes the result justified his tactical switches.

"I noticed in the first 20 minutes of the second half we were too much on the back foot, giving the initiative to Real Madrid," he continued.

"Starting from that point we considered the best choices for the substitutions. I don’t know how decisive it was at the end, but we managed to recover control of the game."