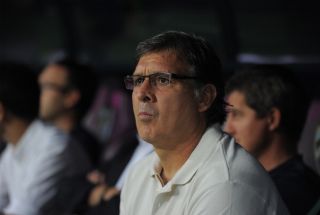 The Barca coach has accepted Neymar is ready to start but believes it is better he is brought along slowly in order to safeguard his development into a long-term star for the Catalans.

"I want to see Neymar as well," Martino said.

"My obligation is to take care of all the players and especially Neymar because he is young and even if he has a lot of success he is still young.

"My hope is that he can play for Barcelona for 10 or 12 years, rather than that he solves my problems in one match, so this situation goes beyond any one coach.

"The only thing I think I want is the best for the player and I think the way we are acting is positive for him, we are not damaging him."

The sides go into the meeting at the Nou Camp with the scores level at 1-1 and Martino said he knows his team will be expected to secure their fourth Super Cup triumph in five years.

"I have been hearing for a long time that in any competition that Barcelona takes part in we become the favourite," he said.

"Then we have to live with this pressure and confirm all the things that everyone says in the build-up to the games.

"I am not worried by it, because these players are used to this pressure. And tomorrow we have a very demanding opponent, very difficult, who have the same opportunities that we have.

"Obviously I would like to win the trophy but I am taking part in a Cup I wasn't involved in last season. It's something the players and Tito Vilanova were involved in.