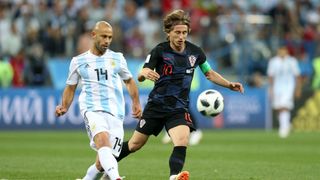 Javier Mascherano insists there has been no bust-up between players and Argentina boss Jorge Sampaoli ahead of their crunch World Cup match against Nigeria.

The South Americans are on the verge of a group-stage exit in Russia after a shock 1-1 draw with Iceland and a thumping 3-0 defeat to Croatia.

A win over Nigeria on Tuesday in their final Group D game may be enough for them to sneak into the last 16, though, if Iceland fail to beat Croatia.

Amid rumours of unrest in the camp after a torrid start to their tournament, Mascherano is adamant that the relationship between players and coach is "normal" and discussions have been had about how to turn around their fortunes.

"The relationship with the coach is completely normal," he said.

"Obviously, when we feel uncomfortable about something we speak with him because if we didn't we would be hypocrites.

"In a meeting like this one, the most we talked about was about football, and how to find a way to solve our game issues.

"And obviously about how we feel on the pitch as players because we are the ones who must make choices at any time, any stage, any position.

"We know if we do things right, we all will benefit from it, and if things go worse we all will suffer for it.

"We know the situation is tricky. We have to be united, to express our opinions, and do everything possible so the team goes into the game in the best position."