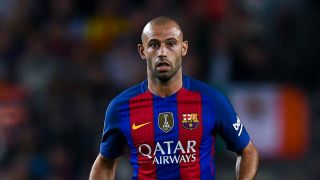 Barcelona have announced Javier Mascherano will sign a new deal with the Camp Nou side until June 2019 on Monday.

The Catalans reached an agreement with the Argentina international in July and the 32-year-old will put pen to paper next week.

Mascherano joined Barcelona from Liverpool in 2010 and has since made 289 appearances in all competitions for the Spanish champions, winning 17 major titles.

He was heavily linked with a move to Juventus ahead of the 2016-17 campaign, but Mascherano stayed put and is now set to commit his future to the club.