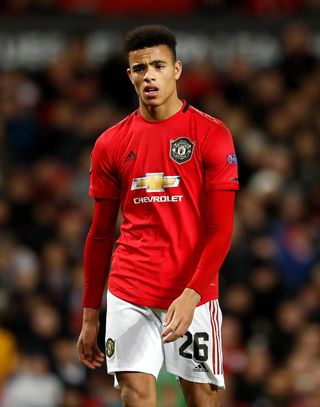 Manchester United striker Mason Greenwood was absent from training ahead of his side’s Europa League tie with Club Brugge.

Ole Gunnar Solskjaer’s squad trained at their Carrington base on Wednesday before their flight to Belgium.

Greenwood, who was an unused substitute for Monday evening’s 2-0 win at Chelsea, was not part of the group but midfielder Scott McTominay took part in the open session as he closes in on a return to action.

Getting in a #WednesdayWorkout before we head to Belgium 🇧🇪#MUFC#UELpic.twitter.com/q4JsmM4g4G— Manchester United (@ManUtd) February 19, 2020

Scotland international McTominay has not played since suffering a knee injury during the 4-1 win over Newcastle on Boxing Day.

Odion Ighalo, Axel Tuanzebe and Victor Lindelof also took part in training, even though Lindelof missed the victory at Stamford Bridge through illness.

Ighalo, who signed on loan from Shanghai Shenhua on transfer deadline day, made his United debut as a late substitute against the Blues.

Teenage midfielder Connor Stanley trained with the first team as he is not part of the squad that had earlier flown to Belgium ahead of a youth friendly with Club Brugge.