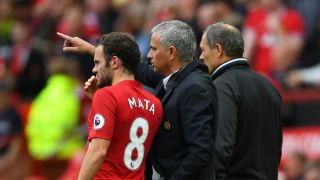 Juan Mata says he feels "important and happy" at Manchester United and outlined his frustration at a summer of speculation linking him with a move away.

Jose Mourinho's arrival at Old Trafford led to a raft of stories suggesting Mata's future lay elsewhere with the pair having a frosty relationship when they worked together at Chelsea prior to the Spain international's move to United in January 2014.

But Mata has been a key player for Mourinho over recent weeks, his form enough to land the club's player of the month award for October.

Asked if he had discussed his role at United with Mourinho, Mata told talkSPORT: "No. It all goes naturally.

"When you are outside and you try to know what is going on your mind is endless.

"I don't know what he [Mourinho] thought, but I did what I always did. Not just here in Manchester but during my career, and all footballers' careers, there are always rumours and you have to do your job. I did mine and I am trying to do mine the best I can.

"I was and am very happy in the team. I feel important in the team and that is it. I feel loved from the fans and the rest is speculation."

His security at Old Trafford now is in stark contrast to the uncertainty of the summer, and the former Valencia midfielder concedes it was a frustrating time.

"There was a lot of things said that I didn't like and they were not true, that was the big problem. If they say something that is maybe happening then that is fine, but [when they are] creating stories I don't like [it].

"Every single day you can try and stop it by saying, 'this is not true', but then you get crazy or you can do what I did which is, 'Ok, you can say whatever you want, I know what is going on, I know the truth and I prefer to stay focused on what I have to do'. My mind was fully focused on that.

"I replied to my friends and my family and told them nothing was true and that was it."