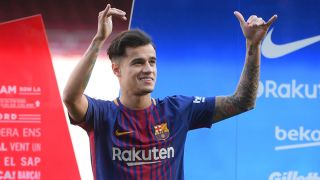 Marco Materazzi feels the huge sum Barcelona paid to sign his former Inter team-mate Philippe Coutinho from Liverpool is a simple function of the transfer market.

Barca parted with a fee that could reportedly rise to £142million to secure the services of the Brazil international.

Materazzi claims he knew the playmaker would be a special talent from their time together at the Nerazzurri.

And with Paris Saint-Germain having smashed the world transfer record to poach Neymar from Camp Nou for €222m in August, the amounts now being paid to secure the game's top talents are of little concern to Materazzi.

Speaking to Omnisport about Coutinho, the former Italy international said: "I've been lucky enough to play alongside with him when he was just 15 years old and he was doing his first trial for Inter.

"Prices always depend [on] the offer and the request. If there's a team asking that much and there's another willing to pay that amount, it's not Marco Materazzi's problem."

Materazzi also welcomed Inter's signing of Lisandro Lopez, and backed the defender to make an impact.

The San Siro side have brought in the 28-year-old centre-back on loan from Benfica until the end of the season, with an option to make the move permanent.

And Materazzi feels the Argentina international could prove to be an effective acquisition as Luciano Spalletti's team, third in Serie A, seek to qualify for the Champions League.

"We are talking about a player with experience, he is a player already made and not a young talent coming out from favelas," Materazzi said.

"He played for Benfica, winning titles. He played several seasons in Champions and Europa League.

"It means he is a well-known player and with his experience can help a lot the team to achieve those targets and Inter fans are expecting."