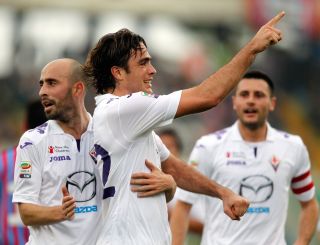 The striker was drafted in from Milan on a six-month loan this week as Fiorentina moved to add more firepower following injuries to Giuseppe Rossi and Mario Gomez.

Matri's impact was immediate as he set up Matias Fernandez for the opener and scored twice himself prior to the interval.

The 3-0 win kept Fiorentina fourth in the Serie A table, just three points behind third-placed Napoli.

And Matri was thrilled to get his career with his new club off to a flying start, having struggled to cement a place at Milan after just one goal in 15 Serie A appearances since his close-season move from Juventus.

"Today is a dream afternoon," he told Sky Sports Italia.

"(It has been) six difficult months, in which I suffered, and for this I thank those who stood by me, my family and my girlfriend.

"I came to Fiorentina because I believed in this project. At 29 years old it is too early to sit on the bench and wait for your turn."

Even an injury, which forced him off at the break, failed to take the shine off the match for the Italy international, although he faces an anxious wait to learn the severity of a calf problem.

"I have a muscle strain in my calf," he added. "Tomorrow (Monday) I will make visits (to the club's medical staff) to see what's there."