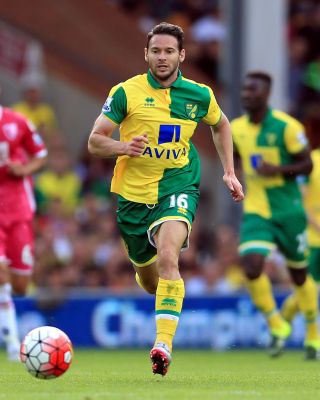 Former England, West Ham and Wolves winger Matt Jarvis was released by Norwich in the summer.

A succession of long-term injuries have blighted his career over the last three years and during that time he has played just 10 first-team games.

Ahead of the start of the EFL season this weekend, in his own words, the 33-year-old reveals his feelings on being without a club and a desire to prove his worth.

He said: “I’ve been without a club since leaving Norwich in May and it has been lonely.

“It’s a very surreal situation to be in. I’m not going in, not training with the lads, I’m not on a tour.

“It really hit me when everyone started posting pictures of going back in for the first day of pre-season and it was ‘oh, wow, this is actually happening. I don’t have a team’.

“You have to be mentally tough and I’ve been lucky, I have a very good family around me.

“They keep me positive and to be home every night with my son Leo – to see his happy smiley face – puts everything into perspective.

“I didn’t play senior football for almost three years because of ankle and knee injuries but, because I haven’t played, I feel I’ve got the years left in me.

“Surgeons would say there was nothing more they could do but no footballer wants to be out, you don’t want it to happen and you fight and fight.

“I’d cry and there were days where I’d be in pain every day. I couldn’t walk, I’d just hurt.

“I thought ‘I can’t be in pain every single day, what am I going to do?’ but you have to keep pushing on and be strong.

“I have to prove to clubs I am fit. That’s the biggest thing. I know what I can do and I know my quality.

“If people need to see me train that’s fine, I know I’m fit and I’ve been working for the last eight or nine weeks.

A little glimpse in my work @GoPerformUK Off season and Pre season work with some ankle injury prevention thrown in for good measure! 😜👍🏼#hardworkpaysoff#preseason#injurypreventionpic.twitter.com/OH5VChEY8v— Matt Jarvis (@MrMattJarvis) July 15, 2019

“I’ve been at a place in Reading called Go Perform every Monday, Tuesday, Thursday and Friday to get myself ready to go.

“But being 33 years old clubs are looking to sign younger players and that’s the way of the world in football.

“Clubs want resale value and future profits, when you get younger players you can sell them on and make some money.

“That’s what happens when you’re not in the Premier League, that’s the game plan.

“I’m looking to go and play some football and enjoy it again. That’s the aim, enjoyment and playing.

“Leo is two years and nine months old and when you have a baby your whole perception of life has a reality check, things which were massively important to you are not the be all and end all.

“Football has been my whole life – and it still is – but it’s got to work for me.

“I’ve been away from my family for a while and missing your kids grow up is really difficult. It’s another priority.

“I love the game, I’ve been gutted it had been taken away from me. I just want to play.

“I’m now training with Gillingham, where I started my career. I started there on Monday and it’s nice to be with a group again, it’s what keeps you going.

“It could lead to something, we’ll see what happens. It shows other clubs I am fit, ready and puts me in a better position.

“You have to go and prove it. Yes, I’ve played in the Premier League but I still have the hunger, I want to prove to myself more than anyone else I can go and play.

“I showed it on loan at Walsall last season. I know I can still play.

“Being a free agent is totally different to 10 years ago, then it was everything. You were in such a good position, you had the clubs in the palm of your hand.

“Now it’s totally different. Unless you’re Aaron Ramsey everyone is looking for the same thing.

“It’s a lot harder, being older makes it a lot more difficult but I know I can do it.”