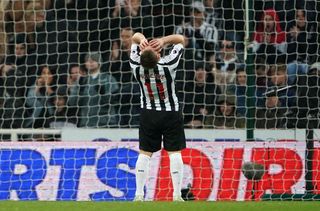 The Magpies came within four minutes of handing Manchester City the chance to effectively retain their crown with victory over Leicester on Monday evening when they twice fought back to make it 2-2 against the Reds on Saturday.

However, substitute Divock Origi’s 86th-minute winner secured a 3-2 victory for the visitors and ensured the title will be decided next Sunday, when Rafael Benitez’s men head for Craven Cottage as City and a relieved Liverpool fight for the main prize.

When it was put to him that Newcastle had run the Champions League semi-finalists close, Ritchie told NUFC TV: “Yes, we’re disappointed still. Top of the league, whatever it is, we’re still not pleased to lose a game whether they’re top of the league or not, so it’s disappointing.

“But hopefully we can finish on a high next week. It’s frustrating, but I suppose you have to look at the full picture.

“We have been good at home this season and I think you can see the fans appreciate the effort the lads have put in, and hopefully we can get three points next Sunday and finish on a high.”

The Magpies, who had won six of their previous seven home games, demonstrated real character against Jurgen Klopp’s side.

Christian Atsu cancelled out Virgil Van Dijk’s opener, in the process sparing full-back Trent Alexander-Arnold a red card for blocking Salomon Rondon’s goal-bound shot with his arm during the build up, and the Venezuela international striker levelled for a second time after Mohamed Salah had restored Liverpool’s lead.

Salah’s departure on a stretcher after colliding with keeper Martin Dubravka was a blow for the visitors which may have further repercussions with Tuesday night’s decisive Champions League clash with Barcelona looming.

However, it was his replacement Origi – albeit from a free-kick awarded for a foul by Ritchie on Fabinho, who appeared to collapse theatrically with little contact – who proved to be the match-winner.

Ritchie said: “It was a good effort from the lads, but we’re disappointed in the end because I didn’t think we deserved to lose the game. I thought we played really well.

Benitez joined his players for a lap of appreciation after the final whistle in what could prove to be his final home game as Newcastle manager if he does not sign a contract extension.

And the 59-year-old Spaniard was left in little doubt as to the affection in which he is held by the club’s supporters, with talks over his future set to continue this week.