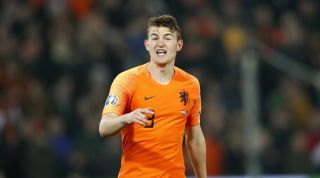 Manchester City are set to rival Barcelona for the signature of Matthijs de Ligt, report the Daily Star.

The Catalans have already agreed a deal to sign Frenkie de Jong and have long been favourites to land his Ajax team-mate too.

But CIty have now joined the race for De Ligt, who has enjoyed a superb season as the Amsterdam outfit target Eredivisie and Champions League glory.

Pep Guardiola wants to add another top-class centre-back to his squad ahead of the 2019/20 campaign, with Nicolas Otamendi likely to depart.

And the City boss has made the 19-year-old his leading target as he attempts to build a squad capable of going all the way in Europe.

However, Guardiola will have to settle his differences with Mino Raiola, De Ligt's agent, if the move is to go through.

Raiola has criticised the Catalan for his handling of Zlatan Ibrahimovic during the pair's time at Barcelona.

City will move back to the top of the Premier League table if they beat Leicester on Monday.