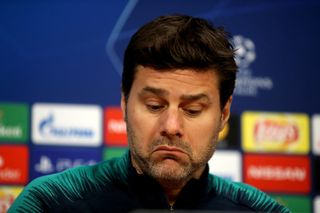 Mauricio Pochettino has suggested he may look for a new challenge if he can lead Tottenham to Champions League glory.

Pochettino has turned himself into one of the most highly-regarded managers in Europe for the work he has done at Spurs, where his original brief was to deliver Champions League football within five years.

During that time Spurs have twice challenged for the Premier League title and, in their third successive European Cup campaign, are now one win away from a possible final.

They do have a rescue mission to perform in Amsterdam as they are trailing Ajax 1-0 from the semi-final first leg last week.

However, the manner of their second-half performance, and an impressive track record away from home in this competition over the last three years, means the prospect of a final appearance in Madrid next month is very much a possibility.

For Spurs to realise that would be an incredible achievement given the circumstances; they have not signed any players for 18 months, they have had a crippling injury list all season and have played most of the year at Wembley.

And, cutting a prickly figure throughout a press conference at the Johan Cruyff Arena, Pochettino, who has been linked with jobs at Manchester United and Real Madrid in the last 12 months, hinted that winning the competition with Spurs would leave him looking for “something different”.

Pushed on the matter further and asked whether he was joking, he added: “It’s not a joke, why? To win the Champions League with Tottenham in these circumstances this season, maybe I need to think about maybe doing something different in the future. Because to repeat this miracle, you know…”

Spurs have history in their grasp as they have never reached the final of the European Cup before and even if they cannot do it on Wednesday, Pochettino reiterated that he is “living the dream”.

“I’m not thinking about if we are creating history or doing something special.

“The most important is to try and enjoy, to try and bring to the players that belief, as we have done to get here but we must also dream.

“But I am enjoying it, I’m living a dream because with Tottenham, where we came from five years ago, with the project, the circumstances, I think no one believed, no one expected in the last three years, to play Champions League three years in a row every season and to be competing every single season and be competing at this stage.”

Their chances in Amsterdam are boosted by the return of Jan Vertonghen following his nasty head injury in last week’s first leg.

The Belgium defender, returning to his former club, suffered a cut nose and sparked a debate on concussion protocol after he tried to play on but then left the pitch in a bad condition.

He did not suffer concussion, though, and he will be able to play in Holland, but may need a face mask.

“He didn’t suffer more than a cut on his nose,” Pochettino said. “It was no more than that. A lot of players keep on playing in the same situation.

Talismanic striker Harry Kane has travelled to Amsterdam but he will only be able to take a watching brief as he has not recovered from his ankle injury while Harry Winks (groin) and Davinson Sanchez (thigh) are also out.

Wouldn’t miss this. Out in Amsterdam supporting the boys. #COYS#UCLpic.twitter.com/OsK7Ay7AHl— Harry Kane (@HKane) May 7, 2019

Skipper Hugo Lloris insisted his side will leave everything on the pitch in their attempt to overturn their deficit.

“We want to believe in our chance,” he said. “We don’t need to think about the next game, only the game tomorrow.

“We want to think about tomorrow, give our best, finish the game on our knees, give the maximum and have no regrets and see what happens.

“It’s important to keep the belief because everything is possible. We are still alive in this competition.”