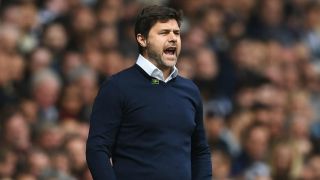 Tottenham boss Mauricio Pochettino insists he is staying at the club after heavy speculation linking him with the Inter job.

Pochettino urged Spurs fans not to worry after reports listed him as a candidate to replace the sacked Stefano Pioli at San Siro for next season, with Inter ready to spend big.

The 45-year-old's stock continues to rise after guiding Tottenham to a second-place finish in his third season at the club in 2016-17.

But Pochettino stressed he is far from finished at Spurs and also rejected claims there is a buy-out clause in his contract.

"There are many, many rumours, but I am committed with the club," said Pochettino, who has a contract with Spurs until 2021.

"There is no reason to leave. There is no buy-out clause in my contract and I will stay here next season.

"You will see on July 3 at the start of pre-season, I will stay here. Don't worry."

Having challenged for the title in each of the last two seasons, Pochettino is desperate to take Spurs one step further next season, when they will play at Wembley while the club's new stadium is being built.

"We were so close again this season, but like last season it was not enough," he said.

"I am sure next season we will try again to fight. We need to do better, be stronger, improve in every area to try to win."

Tottenham are away to Leicester City on Thursday, before the final game of their Premier League season at relegated Hull City three days later.