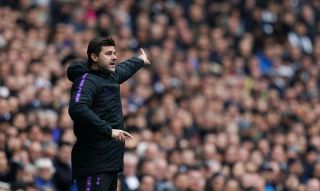 Tottenham manager Mauricio Pochettino admits the mood at the club is not the one he wants going into the first leg of the Champions League semi-final against Ajax.

Spurs suffered their first defeat at their new stadium on Saturday when West Ham won 1-0 in a game where the home side’s gruelling fixture schedule and lengthy injury list caught up with them.

Pochettino accepted they struggled to cope with “stress and fatigue” in the second half and they went down to Michail Antonio’s 67th-minute goal.

It was hardly the ideal build-up to what is the club’s biggest game in recent history not to mention it leaves the door open for their Premier League rivals in the race for the top four, which no one appears willing to win.

“I think the feeling for everyone changes quickly,” Pochettino said after his side’s lethargic display.

“After Brighton (Tuesday’s 1-0 win) everyone was with a very good feeling, a fantastic season and we were going to arrive in our best condition.

“However, after our defeat today it’s like we arrive in a complete opposite way.

“I think we knew very well to compete in the top four and the Champions League is very tough.

“After Brighton it was fantastic and today it is the opposite. I still feel proud of them because it was a massive effort against a team that was preparing for the game with fresh legs – a very good team.

“With all of our circumstances we competed very well to win the game but we need to accept some time it is tough, we didn’t score but we conceded and now we need to move on. We cannot create a problem when there is not one there.”

West Ham earned themselves a place in the record book as the maiden opposition team to win at the Tottenham Hotspur Stadium while Antonio is the first away player to score there.

It completes a north London double for the Hammers as they were also the first away team to win at the Emirates Stadium back in 2007.

“It just happens this way for me and I’m just buzzing to score memorable goals. Hopefully, there are more to come.

“Playing Tottenham is normally a special day anyway but to be the first team to come here and win, and be the first away player to score here, is just amazing.”