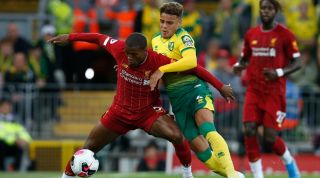 The Mail Online reports that the club are targeting players who will suit Pochettino’s high-intensity pressing game during the January transfer window.

Spurs put in a much-improved performance to beat Red Star 5-0 in the Champions League on Tuesday, but it still wasn’t quite up to standard for the manager.

“The pressing was there but not as much as I want. I want more. We'll get there,” he said.

A right-back is understood to be a top priority for Tottenham in January, with Aarons and Ferguson possible targets.

Norwich’s 19-year-old defender Aarons impressed in the Championship last season and has continued to be a key figure for the Canaries in the top flight, making seven Premier League appearances this season.

England Under-20 international Ferguson, also 19, has caught the eye for the Baggies this season, scoring one goal in 11 Championship games.

The club also plan to strengthen other areas of the team and they remain interested in Bruno Fernandes of Sporting CP, after being linked with the midfielder throughout last summer.

Sales are as likely as signings in the mid-season window, though, as several first-team players could be on the way out.

Spurs are willing to listen to bids for Christian Eriksen, who is in the final year of his contract, as well as Serge Aurier, Victor Wanyama, Eric Dier and Danny Rose.

Defenders Toby Alderweireld and Jan Vertonghen also have uncertain futures at the club, with their deals due to expire at the end of the season.