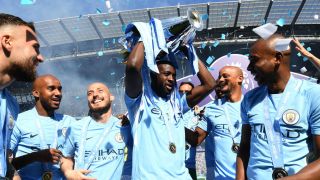 Pep Guardiola concedes he wondered if he made a mistake in selling Yaya Toure during his time in charge of Barcelona after seeing the Manchester City favourite make a flying start to life in the Premier League.

Toure will step out at the Etihad Stadium for the final time on Wednesday when the freshly crowned champions take on Brighton and Hove Albion, Guardiola confirming last week that the 34-year-old midfielder's contract will not be renewed when it expires at the end of the season.

Having operated primarily as a holding midfielder at Barca, Toure was unleashed by then-City boss Roberto Mancini as a dominant midfield powerhouse who scored FA Cup semi-final and final winners in 2011.

The league title followed in 2011-12 and the Ivory Coast international scored an incredible 20 goals from his central role when City regained the Premier League under Manuel Pellegrini in 2013-14.

Those heroics cemented his status as a club great and Guardiola was fully aware of his exploits after moving on from Camp Nou.

"Yeah, of course. There was no doubt about Yaya's quality – all the managers make mistakes, maybe I made a mistake then," he told reporters.

"We tried to keep him at Barcelona but in the end he decided with his agent to come here and made an excellent decision.

"I know he was so happy with family here and that is the most important thing. He had a lot of success.

"He loves the fans, the fans love him and hopefully the stadium can be like the last two or three games at home and show huge support to a guy who deserves it for what he has done."

The imminent picture-perfect farewell seemed improbable when Toure was exiled from the City first-team squad at the start of last season after Guardiola became engaged in a public spat with the player's outspoken agent Dimitri Seluk.

He returned with a match-winning brace at Crystal Palace and remained a first-team fixture for the rest of the campaign.

"Believe me, I was so happy with what he did in Barcelona and now here," said Guardiola, who confirmed his starting XI to face Brighton would be "Yaya and 10 more".

"If did not like him, he would not be here with me all this period.

"This season I decided on what I saw – maybe wrong, maybe not. I decided for other players and we took the decision that it is the moment to finish our relationship as a manager and a football player."

Final home game of the season preparations! May 8, 2018

While Toure's future is cut and dried, Guardiola refused to shed any light on speculation he is will sign an extension to his current deal, which expires at the end of next season.

"I have one more year, so next season I will be here," he added. "Take time.

"I want to finish the season good and start to talk about what we have to do next season in terms of the people who are going to stay, who we are going to buy.

"With the club we are going to talk. We have time to talk fluently about what is best for the club and for all of us."