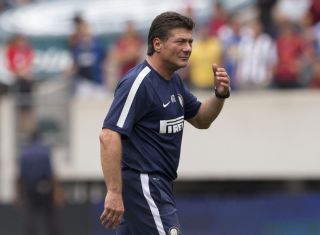 The Serie A side put one foot in the group stages after leaving Iceland with a 3-0 victory in last Wednesday's play-off first leg.

However, head coach Mazzarri has told his team to put that result out of their minds at San Siro and play the game in the right manner against the lowest ranked side in the competition.

"I hope there will be a great atmosphere tomorrow that helps us get through," Mazzarri said at the pre-match news conference.

"I've asked the players to forget the first-leg result, we need to focus on our target - making the group phase.

"They need to show everything that I've always tried to put across to the teams I've coached.

"You can't achieve anything in modern football unless everyone pitches in and the boys believe in that approach.

"The first thing we want to prove is that we're a team that fights and can be a match for anyone."

Mazzarri also confirmed that he will make changes to his starting line-up with goalkeeper Juan Pablo Carrizo and striker Pablo Daniel Osvaldo set to start.