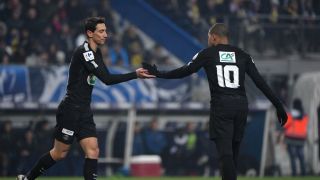 The arrival of Mbappe and Neymar at PSG for this season has contributed to Argentina international Di Maria not being guaranteed a starting berth.

But the 29-year-old was the star turn as Unai Emery's men cruised into the quarter-finals of the Coupe de France on Tuesday, netting a hat-trick as they beat Ligue 2 Sochaux 4-1 to take his goals tally since the turn of the year to seven.

A more taxing assignment lies in wait at the Santiago Bernabeu next Wednesday and Mbappe feels PSG would be better off with Di Maria in the first XI to face his former club.

"We all know very well how important Di Maria is to us," the France star told reporters.

"When he is like that, it's good for the whole team and it allows us to win a few games in a row.

"Yes, he deserves to start against Real Madrid, but I'm not the coach. But he does some beautiful things. It's great for everyone."