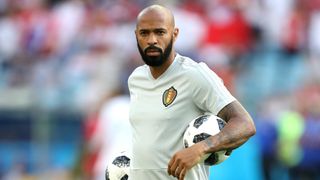 Kylian Mbappe admitted it will be bizarre to see former idol Thierry Henry backing Belgium in France's bid for a place in the World Cup final.

Henry, a 1998 champion with Les Bleus, finds himself in a peculiar position leading into Tuesday's semi-final encounter in St Petersburg as he plots the downfall of his home nation.

The former Arsenal forward has assisted Belgium boss Roberto Martinez since 2016 and could provide valuable insights into the team he represented on 123 occasions.

"It's going to be weird to see Thierry again. He is someone I like a lot," the teenager told Telefoot.

"There is a lot of respect between us. He was a great player, he inspired me.

"He is French, but he will be on the bench of the opponent. It will surely be weird for him too."

Another great reception for the boys at base camp last night! July 7, 2018

Mbappe has been one of the standout stars of France's surge to the final four in Russia, scoring three goals and turning in a series of electrifying performances.

The Paris Saint-Germain attacker claims spirits are high among Didier Deschamps' squad as they aim to return to the final for the first time since 2006.

"A team is forming and that's important."