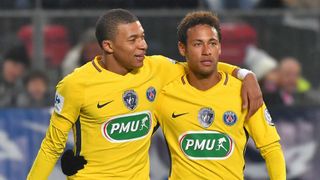 Kylian Mbappe believes there is still more to come from Paris Saint-Germain's star-studded strikeforce during the second half of the season.

Mbappe has hit eight Ligue 1 goals, while Neymar has managed 11 and Edinson Cavani has contributed 19 to help PSG sit nine points clear at the top of the table, with a game in hand over nearest challengers Marseille.

While the relationship between Cavani and Neymar has not always been smooth - the pair rowing on the pitch about who would take set pieces - Mbappe has settled in easily after his switch from Monaco.

And the France international thinks 2018 may therefore prove to be an even better year for him despite flourishing during the course of 2017 for club and country.

"You always have to aim higher," Mbappe told beIN SPORTS. "You can't put any limits on yourself, because if you do, and you reach that limit, there's nowhere else to go, but we'll keep progressing, and we'll see where we end up.

"I always want more. I don't know if that's a good quality or not, but I always, always want more, and I want to work hard to get it. It's been a fantastic year, I have done very well. Now in 2018, I hope I can do even better and improve."

The 19-year-old added: "I think I had to adapt my game to PSG's. I went from one system to something totally different. At Monaco, we played on the counter-attack and we often had acres of space to run in to and score goals. Now at PSG it's different.

"Our opponents get everyone behind the ball, so we need to play a little less deep, and move the ball around a bit more, lots of one-twos, things like that. It's something I've had to engrave into my head, and it's getting better and better.

Julian Draxler has been linked with a move away from the French capital after struggling for regular starts under Unai Emery, but Mbappe indicated he would like the Germany international to stay.

"Draxler, he's amazing. I used to watch him on TV and knew he was good, but when I saw him up close I realised he's incredible," Mbappe said.

"His technique is fantastic. He's changed position too, and he's adapted so quickly. He's a key man for us.

"I play for a superb team, with great players. It's a real pleasure. that's what I feel, more than pressure – that comes from the press! But all I want is to enjoy playing and with these great players, that brings me a great deal of pleasure."