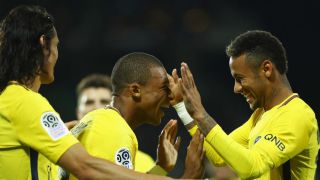 Kylian Mbappe, Neymar and Edinson Cavani fired Paris Saint-Germain to their best start to a Ligue 1 campaign following the 5-1 victory at Metz on Friday.

Cavani rounded Metz goalkeeper Eiji Kawashima to open the scoring in the 31st minute, but Emmanuel Riviere headed home a surprise equaliser before the break.

However, after Benoit Assou-Ekotto's controversial red card for a strong, but seemingly fair challenge on Mbappe, the 18-year-old debutant made them pay with his first goal since joining the club on an initial loan from Ligue 1 champions Monaco.

Neymar got in on the act before Cavani took his league tally for the season to seven, with substitute Lucas Moura rounding off the scoring to complete a historic night for Unai Emery's side.