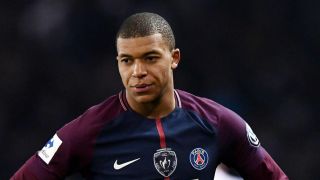 Kylian Mbappe has shaken off an ankle problem to start for Paris Saint-Germain in the second leg of their Champions League last-16 clash with Real Madrid.

The teenager joins Edinson Cavani and Angel Di Maria in a front three weakened by the recent loss of Neymar.

Madrid have their own fitness concerns, with Luka Modric and Toni Kroos returning to the bench following hamstring and knee complaints respectively.

The midfield pair have both failed to feature since helping Zinedine Zidane's side to a 3-1 first-leg win over PSG at the Santiago Bernabeu last month.

Gareth Bale and Isco are also among the substitutes at Parc des Princes, while Mateo Kovacic starts.

This is our starting XI for tonight's Champions League match against ! Let's do this, lads! !March 6, 2018