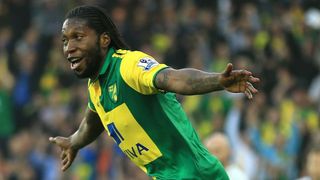 Dieumerci Mbokani will hope to fire Hull City to Premier League safety after signing a loan deal for the entire 2016-17 campaign.

Dynamo Kiev striker Mbokani spent last season with Norwich City where he scored seven times in 29 league appearances, but it was not enough to keep them in the top flight.

Norwich were linked with another move for the 30-year-old forward, however Mbokani has opted to return to the Premier League with Mike Phelan's side.

He will provide much needed attacking options at the KCOM Stadium after Hull started the new season with just 13 senior players.

Phelan has bolstered that squad with the signings of James Weir, David Marshall, Ryan Mason and Will Keane in the last two days.

Mbokani will go straight into Hull's squad for the next Premier League clash with Burnley on September 10.