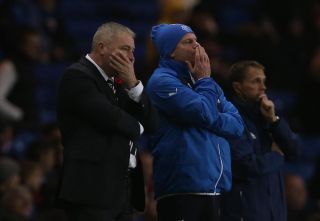 In the lead-up to Rangers' clash with Queen of the South in the Scottish Championship on Friday, news broke in a number of media outlets that McCoist had offered to resign.

But speaking after his side lost 2-0 on the road, McCoist did not address the speculation and insisted he remains "committed" to helping the Glasgow-based club back into the Scottish Premiership by the end of the season.

"I can assure the Rangers fans I'm 100 per cent committed to getting Rangers into the top flight," he told BT Sport.

"I'll continue in my job and hopefully get them back into the top flight."

According to reports, McCoist has a 12-month rolling contract with Rangers and as part of the terms, he must complete a full year after tendering his resignation, which will cost the club £400,000.

If Rangers want to get rid of him earlier they must pay him out - something that most believe is beyond the club's financial capabilities - or negotiate an alternative settlement.

"I am the Rangers manager and that will be the case hopefully for the foreseeable future," McCoist said.

After Friday's defeat, Rangers sit nine points behind Championship leaders Hearts, who occupy the only automatic promotion spot in the Scottish second tier.

Hearts have a game in hand as well, with the Edinburgh-based outfit set to travel to second-last Cowdenbeath on Saturday.

If Hearts win, Rangers would be 12 points off automatic promotion with 20 matches to play this season.

McCoist is reportedly unhappy with how the club is being run - according to The Guardian they have spent £70m in 18 months - as Rangers work towards returning to the Premiership for the first time since the 2011-12 season.

But the manager, who scored 251 goals in 418 league games for Rangers between 1983 and 1998, is not as popular at Ibrox as he once was, with many fans unhappy with his style of play in the lower leagues.