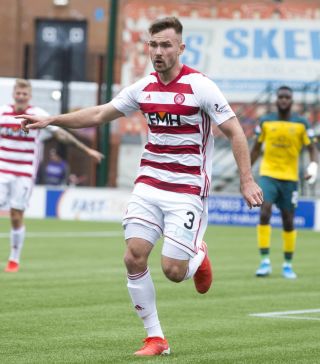 Hamilton defender Scott McMann is pleased to be able to focus solely on his performances on the pitch after securing his long-term future earlier this month.

The 23-year-old academy graduate has played a key role in the club’s strong start to the season and was rewarded with a new contract which ties him to New Douglas Park until 2022.

McMann was happy to get the deal over the line so that he can give his full attention to football.

He said: “It’s sort of been in the pipeline for a little while but I’m happy to get it finalised so I can just focus on football now.

“It means I can focus on helping the club achieve what they want to achieve.

“We’ve nearly played every team in the league and we seem to be competing with everyone. I think that will continue to be the case, I can’t see us at this moment having a dip.”

Hamilton sit eighth in the Ladbrokes Premiership table, five points clear of Saturday’s hosts St Johnstone, who occupy bottom spot after being unable to win any of their first nine league games.

McMann knows the Saints will be heading into the game with their eyes firmly fixed on ending that winless run.

He added: “When you’re down there scrapping, you give it everything. They will be looking to get their first win so they’ll be targeting Saturday as a massive one.

“They’ve got good attacking players so we’ll need to defend properly if we want to get a result and go from there.”