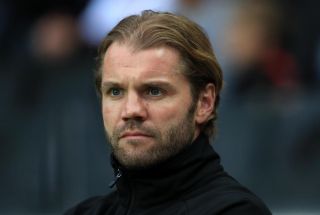 Dundee United will take a one-goal advantage into the second leg of the Ladbrokes Premiership play-off semi-final thanks to Paul McMullan’s second-half strike in the 1-0 win at Inverness.

Ten-man Inverness were unable to keep the score level ahead of the second leg at Tannadice after Liam Polworth was sent off three minutes into the second half.

The midfielder was instantly dismissed for a high boot which caught the face of Mark Connolly.

The hosts started the game brightly as Polworth beat Jamie Robson on the right wing and cut into the box where his powerful low drive was saved by Benjamin Siegrist.

Robbie Neilson’s side responded when Peter Pawlett’s pass went through the centre of the Inverness defence allowing Osman Sow to run on to with only the goalkeeper to beat. But his shot from the edge of the area was well saved by Mark Ridgers before the ball was cleared.

Joe Chalmers came close to giving Inverness the lead midway through the first half when he latched on to a cross from Brad McKay and his curling effort from the edge of the box went inches wide of the right post.

Inverness went even closer when Chalmers’ cross from the left wing found Jordan White in the box and his header beat Siegrist but smashed against the inside of the left post.

Ridgers came to Inverness’ rescue again when McMullan stole the ball off Kevin McHattie and the striker charged towards goal before shooting from 12 yards but the goalkeeper did well to parry the ball out for a corner.

Dundee United threatened again and Paul Watson beat the Inverness defence in the air to nod McMullan’s cross towards goal but his header was cleared off the line by Shaun Rooney.

Polworth continued to threaten down the right wing and his cross found White unchallenged in the box with Siegrist forced to pull off another save to prevent the ball from hitting the top right corner.

Inverness were reduced to 10 men three minutes into the second half when Polworth was sent off after a high boot caught Connolly in the face and he was instantly dismissed by referee Nick Walsh.

Robson came close to putting United in front midway through the second half but his close-range header lacked any power to trouble Ridgers.

The killer blow came in the 77th minute after Nicky Clark’s strike hit the post but McMullan reacted first to fire home the rebound from close range to give United the advantage in the second leg.