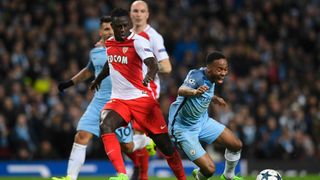 Monaco confirmed Mendy is still recovering from an injury to his right thigh suffered while on international duty with France, although negotiations between City and the Ligue 1 champions, who are claimed to be holding out for close to £50million for the 22-year-old, are reported to be ongoing.

City are understood to be close to securing Tottenham right-back Kyle Walker for a similar fee having been disappointed by Dani Alves' last-ditch decision to choose a move to Paris Saint-Germain on a free transfer ahead of reuniting with Pep Guardiola at Eastlands.

Guardiola has already raided Monaco, who dumped City out of the Champions League last term, to snap up playmaker Bernardo Silva, while a host of other star performers from Leonardo Jardim's squad are attracting attention.

One of those is midfielder Tiemoue Bakayoko, who is said to be on the verge of a £39.7m move to Chelsea.

Bakayoko underwent keyhole knee surgery at the end of last season, but is not listed among Monaco's injury absentees for the tour on their website, while newspaper reports in the UK say the 22-year-old will undergo a medical with Chelsea on Friday.

Teenage sensation Kylian Mbappe and winger Thomas Lemar are among the travelling party, as are Kamil Glik and Djibril Sidibe – the defensive duo who on Thursday signed contract extensions at Monaco.