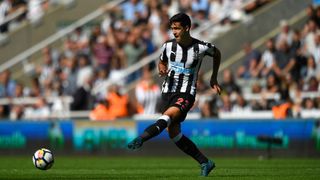 Mikel Merino has left Newcastle United for Real Sociedad after just one season at St James' Park, the club have confirmed.

The midfielder arrived on loan from Borussia Dortmund ahead of the 2017-18 campaign, before the Magpies exercised a clause to make the move permanent on a five-year deal in October.

However, Merino found Premier League starts hard to come by in the second half of the campaign and just 14 of his 24 top-flight appearances were as part of the starting XI.

The 22-year-old now returns to Spain with Sociedad, a club based just over 50 miles from his home town of Pamplona, with reports suggesting he had a £10million release clause in his contract.

"I'm very happy and feel joy. I love this club, it is very close to Osasuna. I have been a fan since I was little," Merino, who has signed a deal until 2023, told Sociedad's official website.

"I am delighted to be here and I can't wait to work with the ball."