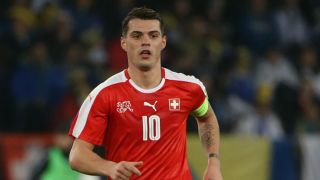 Arsenal defender Per Mertesacker is relishing the opportunity to play alongside Granit Xhaka, who he said is the "perfect signing" for the Premier League title hopefuls.

Xhaka is set to spearhead Arsenal's midfield after arriving from German outfit Borussia Monchengladbach in May.

The 23-year-old Switzerland captain featured at Euro 2016, where he helped the country reach the last-16.

And Mertesacker insists Xhaka will play a key role at the Emirates.

"I don't know him personally but that doesn't matter, we will get along with each other very quickly because he is a good player and has done so much for Borussia Monchengladbach," Mertesacker told Arsenal's website.

"He can speak German as well, so it will be joy to get his first year going and help him bed in as a player.

"He's a leader and that is really important, especially in midfield. He has got a very good attitude, is very composed on the ball and contributes a lot.

"He is a good passer as well, so he will set the tempo. I am looking forward to how he does it, how composed he will be in training and in the games. He will be the perfect signing for us."