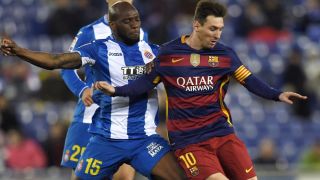 Lionel Messi came within "centimetres" of signing on loan for Barcelona's local rivals Espanyol, according to Tottenham manager Mauricio Pochettino.

Pochettino was playing with Espanyol in the latter stages of his career when the club apparently explored a loan deal for Barca's Messi.

The Spurs boss was responding to comments from Brendan Rodgers after the former Liverpool manager claimed he came close to signing Dele Alli.

Now at Tottenham, Alli is quickly emerging as a rising star of English football, but Pochettino does not see the value in talking about what might have been.

"Do you know how many players in football are close to signing for many clubs? It's only one comment from some manager. Dele Alli now is here," the Argentine said.

"We were close at Espanyol to signing Lionel Messi – a centimetre. Unbelievable but this was true.

"Messi was 17, playing for [the] Under-18s and very close to signing for Espanyol. It was close but it never happened.

Alli scored one of the goals of the Premier League season so far as Tottenham beat Crystal Palace 3-1 away on Saturday, the teenager flicking the ball over his head and turning before volleying into the net as in-form Spurs' continued their charge up the table.