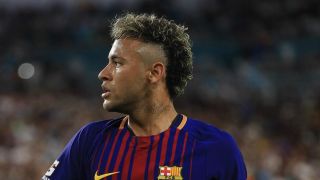 Lionel Messi and Cristiano Ronaldo would be bigger losses to LaLiga than Paris Saint-Germain target Neymar, according to the league's president Javier Tebas.

PSG are reportedly ready to meet Neymar's €222million release clause to buy him from Barcelona, but Tebas suggested that breaking the world transfer record in such extravagant fashion would contravene Financial Fair Play (FFP) rules.

Neymar featured with Messi against Ronaldo's Madrid in a 3-2 International Champions Cup win for Barca in Miami on Saturday, and Tebas played down the potential departure of the 25-year-old Brazil international from Camp Nou.

"LaLiga and Barcelona are bigger than Neymar," Tebas said to Mundo Deportivo. "I would be more worried if Cristiano Ronaldo or Lionel Messi left."

Tebas said PSG will be reported over potential FFP breaches regardless of whether or not Neymar's proposed move to the Ligue 1 side happens.

"Even if they don't pay the release clause [of Neymar] we will report them," Tebas said. "They cannot make up some commercial numbers that are bigger than Barcelona or Real Madrid.

"Nobody believes that, which means that the state of Qatar is injecting money [into the club] and that violates Financial Fair Play.

"We will report it because it violates the rules of UEFA's financial fair play and the competition rules of the European Union.

"If UEFA ignore it, we will take it to Swiss competition courts and in Brussels - and we do not rule out the courts of France and Spain itself."