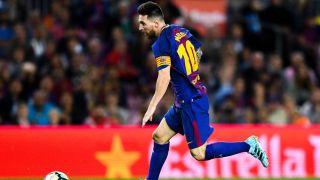 Lionel Messi showed again he is from "another planet" with his four-goal haul against Eibar, Barcelona team-mate Nelson Semedo said.

Messi was in spectacular form on Tuesday, scoring four times in Barca's 6-1 win over Eibar in LaLiga.

The Argentina international has scored 12 goals in eight games in all competitions this season, leaving his team-mates and coach Ernesto Valverde marvelling at his exploits once more.

Semedo, who played 90 minutes in the big win, said he continued to be stunned by what Messi could produce.

"Messi is spectacular," the Portugal international said via the club's website.

"It's a privilege to play with him, he always surprises, he's from another planet."

Barca's win continued their perfect start to the LaLiga campaign as they pulled five points clear at the top.