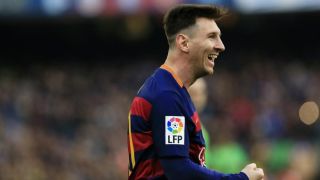 Lionel Messi has made it clear he will never leave Barcelona for another European club, ruling out a move to Manchester City or Paris Saint-Germain.

City are reportedly keen to lure the Argentina international to the Premier League, while the Ligue 1 champions are also in the hunt for his signature.

However, the 28-year-old has now stressed he wants to end his European career with Barcelona, before hanging up his boots in Argentina.

"I have always said that Barcelona is my home and that I want to retire at this club, but I was talking about my European career there," Messi told France Football.

"I could never play for another European club than Barcelona.

"Anything can happen in football, but I have no doubts about what I want, and what I want is to stay here at Barcelona."

Messi has been a key figure for Barcelona this campaign despite missing two months through injury, scoring 19 goals in 23 appearances in all competitions.