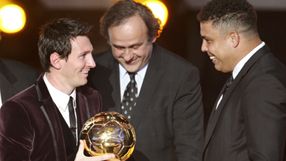 Despite still being only 25, Messi has already been hailed by some as football's greatest-ever player after a sensational career at the Catalan club.

The diminutive Argentine, winner of the last two Ballon d'Or trophies, has already netted 273 goals - the club's record figure in all competitions - in only 346 appearances.

Next in his sights is Cesar Rodriguez's 192 La Liga goals, of which Messi is now only 12 shy.

Few in history can match his goal-scoring exploits, but the man who inspired a young Messi certainly knew where the goal was.

Brazil's Ronaldo Luís Nazário de Lima, otherwise known simply by his forename, rattled in more than 400 goals in an 18-year career which took in spells with the likes of Barcelona, Inter Milan, Real Madrid and AC Milan.

No man has ever matched the striker's 15 goals in World Cups and Messi is in no two minds about which star he watched with awe as an aspiring youngster.

Speaking exclusively in the December 2012 issue of FourFourTwo, Messi said: "Ronaldo was my hero. He was the best forward I've ever seen. He was so fast that he could score a goal from nothing and he struck the ball better than anyone I've seen."

Messi's first Barcelona goal came in a swift but successful cameo against Albacete in May 2005. While the Argentine may able to recall the vast majority of his incredible total for the club, most will forgive him for the odd omission.

"I wouldn't say I can remember every single goal I've scored, but I don't forget them easily," admitted the forward.

But ask Messi for his favourite goal and there is no hesitation from the 25-year-old. Diego Maradona's dazzling dribble and finish against England in the 1986 World Cup finals, uncannily recreated by Messi himself against Getafe in 2007, ranks highest of all.

"Maradona [his second goal] against England," he confirmed. "I was only one or something, but I've seen it many times on television. It was beautiful, the way he ran past all of those players, and in such an important game."

Read the full in-depth interview with Lionel Messi in the December 2012 issue of FourFourTwo – out now. It features exclusive interviews with Radamel Falcao and Micky Quinn, while we nail down your club's best-ever goal and reflect on football's most dramatic last-gasp winners. Subscribe!