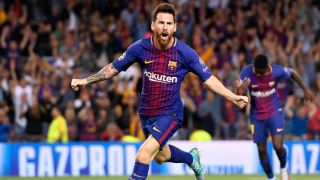 Lionel Messi drew level with Cristiano Ronaldo's tally of four European Golden Shoes after receiving the award at a ceremony on Friday.

The Barcelona superstar claimed the prize – handed to Europe's top goalscorer – for his 37 La Liga strikes in 2016-17.

His impressive tally came from 34 top-flight games and saw him top the charts ahead of Sporting CP's Bas Dost, who netted 34 in the Primeira Liga, while Borussia Dortmund's Pierre-Emerick Aubameyang rounded out the top three with 31.

Last year's victor and Messi's Barcelona team-mate Luis Suarez was fifth this time around with 29, one fewer than Bayern Munich's Robert Lewandowski.