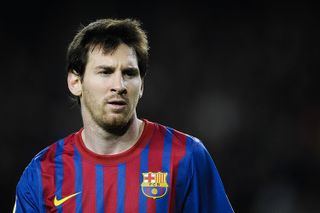 The 26-year-old was forced to sit out Argentina's 2-1 victory over Italy on Wednesday in Rome, after picking up a thigh strain during Barcelona's pre-season tour of the Far East.

Messi has been focusing purely on rehabilitation work with the club's medical staff during the week in order to be fit to feature at Camp Nou on Sunday.

And new manager Gerardo Martino has decided to name him in the 18-man squad.

"Messi is very enthusiastic," Martino said in a press conference ahead of the game.

"He has been working hard during his holiday. There are always records to break and trophies to win."

There is also a place for Spain international Cesc Fabregas who sprained his ankle against Malaysia on August 10.

He missed his national side's 2-0 win over Ecuador in Guayaquil on Wednesday, but has been given the green light to feature on Sunday.

But there is still no place for Carles Puyol, who continues his rehabilitation from a knee operation in June.

The club have been linked with several centre-backs through the close-season to bolster their defensive options, but Martino said the club are in no hurry to draft in reinforcements.

"Puyol is recovering as planned," he continued. "We're waiting for him to join us. We expect him to be able to play in September.

"Last year's defensive problems were linked to injuries. If all players are fit, we have options."