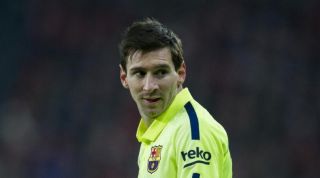 Lionel Messi scored the vital goal to clinch the Liga title for Barcelona with a 1-0 victory over previous champions Atletico Madrid on Sunday.

Barca travelled to the Vicente Calderon knowing that three points would be enough to reclaim their crown from Atletico and seal the first leg of a potential league, Copa del Rey and UEFA Champions League treble.

And, fittingly, it was their talisman Messi who provided the spark of inspiration, the Argentinian superstar popping up with a typically brilliant finish just after the hour mark for his 41st - and most important - Liga goal of the season.

Messi's strike came shortly after his rival Cristiano Ronaldo had threatened to send the title race down to the wire by putting second-placed Real Madrid 1-0 up at Espanyol.

Real won 4-1, but that was irrelevant as Barca sealed their seventh league title in the last decade with one game to spare - a year to the day since Atletico won the crown at Camp Nou.