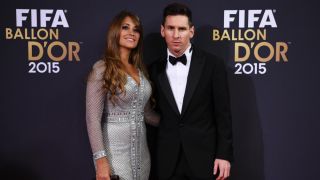 The prolific attacker guided Barcelona to the treble in 2014-15, before adding the Club World Cup and UEFA Super Cup to his trophy cabinet in the first half of this season, while also reaching the final of the Copa America with Argentina in July.

Messi has now won the Ballon d'Or five times - twice more than last year's winner Ronaldo - and he felt honoured to be voted the best in the world once more after coming in second in 2013 and 2014.

"It's a very special moment for me to be back here on the stage, winning again after being in the audience to see Ronaldo win for the last two years," the 28-year-old stated upon receiving his award.

"It's incredible that it's my fifth. It's much more than I ever dreamed of as a kid.

"I want to thank all of my team-mates and those who voted for me. This would not have been possible without the team.

"And I want to thank football in general for everything it has given me during my life, both the good things and the bad things."