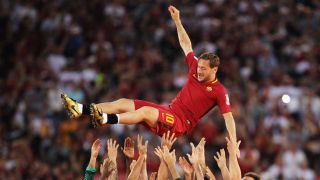 Lionel Messi has paid tribute to the "incredible" Francesco Totti after the Roma legend played his last game for the Serie A club on Sunday.

Totti brought the curtain down on 25 seasons in the Roma first team in a 3-2 win over Genoa, the 40-year-old coming off the bench to help secure second place and Champions League football next term.

During his illustrious career Totti won scored 307 goals in 786 appearances in all competitions, collecting one Scudetto and two Coppa Italia titles in the process.

The likes of Sergio Ramos, Antonio Conte and Daniele De Rossi all paid tribute to the striker following last weekend's clash, and Messi has followed suit.

In a message posted on his Facebook account, the Argentina international wrote: "You are incredible, Capitano! Wishing you all the best in the next stage of your life Francesco Totti."

Totti's future remains uncertain. Many had suggested he would retire after the Genoa victory but the player hinted he had a "new adventure" in his career to look forward to.