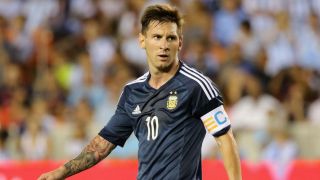 Barcelona superstar Lionel Messi dreams of finishing his career back in his homeland of Argentina.

Messi left Rosario as a 13-year-old to begin his journey to the top of world football in Catalonia.

The 28-year-old won his fifth Ballon d'Or in Zurich on Monday and at the ceremony he told reporters that he would ideally complete his playing days at Barca, where his current contract ends in 2018.

But speaking to FIFA.com, Messi revealed that the lure of a return home – where his boyhood club was Newell's Old Boys – still holds considerable appeal.

"Yes, I've always said that [I would like to play in Argentina]," he said.

"It was always my dream when I was a boy, though I had to leave at a very early age because of my situation and it didn’t happen.

"I had to go to Europe, start out with Barcelona and make my career there. But I would like to return to Argentinian football one day. What happens after that, only God knows."

Messi opened the scoring as Barcelona crowned a stellar 2015 by beating River Plate in the Club World Cup final last month and he conceded that helping to defeat an Argentinian club was an unusual feeling.

"It was, for a number of reasons," he said, before reflecting on an almost apologetic goal celebration at Yokohama International Stadium.

"I know how much effort all those fans made in making that trip and how excited they were. And there was me, the Argentinian, scoring the first goal and ruining it all for them.

"I don’t know if I was actually saying sorry, but it was a type of apology."