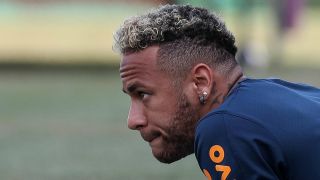 Cristiano Ronaldo and Lionel Messi are out of the World Cup, but Ballon d'Or rival Neymar has arrived in Samara for Brazil's last-16 tie against Mexico.

Brazil were not completely convincing in the group stage, drawing with Switzerland in a fiery opener before late goals from Philippe Coutinho and Neymar downed Costa Rica.

Tite's men did look better when brushing Serbia aside, setting up a clash with a Mexico team who stunned holders Germany in their opening game at the tournament.

Neymar hurt his ankle in the Switzerland match but has started all three group games after recovering from a fractured foot suffered in February, with the world's most expensive player travelling to Samara with his side ahead of Monday's game.

Brazil fans were in party mood as they greeted their heroes at the team's hotel, with Neymar potentially needing to follow Ronaldo's lead in calling for supporters to keep quiet and allow him to sleep.

In contast, Ronaldo and Messi will soon be departing Russia to get ready for the 2018-19 domestic season, their World Cup dreams left in tatters.