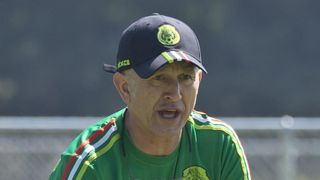 Giovani dos Santos may have paved the road for in-their-prime Mexico stars to play in MLS, with Carlos Vela and Alan Pulido rumored to follow suit, but it's not a route that earns the endorsement of El Tri coach Juan Carlos Osorio.

Speaking with Excelsior , Osorio said he would prefer to see his players ply their trade in Europe while MLS remains a more appealing destination for aging stars.

"I think that at some point they should go to America because it may be a long-term goal," Osorio said. "But I think the time when a player is at his peak performance is to to be spent in Europe and not in MLS. I think, at this time, that league is for players at the end of their careers and not for a player who still has a lot to give."

The coach's comments come after Dos Santos signed with the LA Galaxy in August at age 26, becoming the youngest Mexico national team regular to join an MLS team.

Osorio, who coached the New York Red Bulls from 2007 to 2009, specifically cited Real Sociedad striker Vela as a player he'd like to see remain in Europe after the 26-year-old's agent acknowledged the possibility of an MLS move.

"I expressed this to Carlos Vela last year when I was in Europe, and I believe the objective of all the world’s players is to go to Europe — or at least that’s the primary objective — because there they have the best leagues, the best tournaments and the whole world can see you play there," Osorio said.