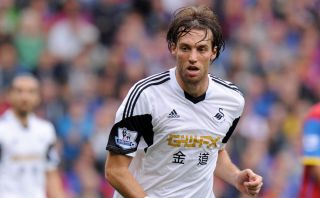 The attacking midfielder won his first cap for Spain in their 2-1 FIFA World Cup qualifying win over Belarus on Friday.

Michu, 27, has proved a shrewd acquisition by Swansea manager Michael Laudrup, scoring 27 goals in 56 appearances since his £2million move from Rayo Vallecano in July 2012.

The Spaniard's form helped the Welsh club to the League Cup last season and his recent call-up from the world and European champions has increased speculation surrounding his future at the Liberty Stadium.

Still, Michu - who penned a new four-year contract with Swansea in January - has no immediate desire to move on.

"I am not thinking about that at the moment," he told Marca.

"I am enjoying myself very much at Swansea.

"It's a modest team but we are competing in Europe (in the UEFA Europa League) and we already won a title last season, the first in the club's history."

Michu is in Spain's squad for Tuesday's final qualifier against Georgia in Albacete, which Vicente del Bosque's side require just a point from in order to seal their spot at Brazil 2014.