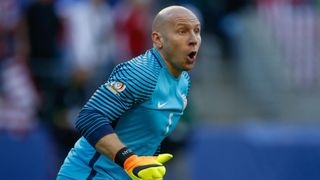 Middlesbrough have completed the signing of goalkeeper Brad Guzan from Aston Villa on a two-year-deal, the club have confirmed.

The United States goalkeeper moved to Villa Park in July 2008, but the club were relegated from the Premier League last season while the signing of Pierluigi Gollini left his position under threat.

He will face stiff competition for the gloves at the Riverside Stadium, though, with Boro having already snapped up former Barcelona goalkeeper Victor Valdes during a busy recruitment drive with manager Aitor Karanka having made eight senior signings during the transfer window.

As well as Valdes and Guzan, the likes of Alvaro Negredo, Marten de Roon, Viktor Fischer and Antonio Barragan have all made the switch to the Riverside.