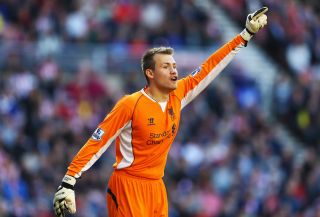 Brendan Rodgers' side travel to leaders Arsenal on Saturday and will go top with a victory if Chelsea fail to beat Newcastle United in the early kick-off.

Liverpool have not won the title since the 1989-90 campaign and in the last three seasons they have failed to finish in the top four.

But Mignolet, who joined from Sunderland in the close-season, believes all that could change this time around.

"We're near the top of the table and so far things have gone well," the Belgian said, in quotes reported by The Express.

"From my experiences at Sunderland I know that injuries and suspensions can play a big part.

"Here the squad is deeper and we should be able to deal with stuff like that in a better way."

This weekend's trip to the Emirates begins a run of three away matches in four games for Liverpool, with the Merseyside derby against Everton and a visit to Hull City coming after the visit of Fulham.