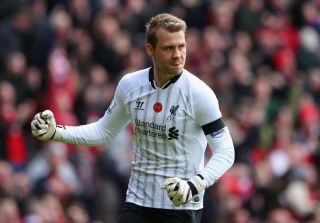 Suarez has 30 league goals to his name in 2013-14, helping power Brendan Rodgers' men to 96 goals in 35 games and five points clear top of the table.

The Uruguayan's feat is all the more worthy, given he missed the first five games of the season, and Belgian custodian Mignolet has enjoyed watching his front man from the other end of the park.

"To score 30 league goals in a season is amazing," Mignolet told the Liverpool Echo.

"Everybody knows what Luis can do and the goals he contributes to the team are very important for us.

"He doesn't surprise me anymore. I see him every day in training.

"It's not an accident, it's not luck, the reason he has scored so many goals is down to his ability. He is so good and we're very pleased to have him."

Mignolet refuted suggestions Liverpool were a one-man team behind Suarez, with the likes of Daniel Sturridge (20 goals) and Raheem Sterling also in the mix for individual accolades at seasons' end.

"Luis has a good chance but there are a few contenders for that award (PFA Players' Player of the Year) in our team," he said.

"There are other players here who are also very important for the team.

"It's more about the squad than any individual. You saw the togetherness in the scenes after the win over Manchester City and again at Norwich.

"We've cleared different hurdles together as a team. Every game is mentally and physically tough but we get through it and it makes you stronger."

Ahead of their virtual title decider against Chelsea, Mignolet said he and his team-mates were not nervous, despite a win all but sealing their first Premier League title.

"There are no signs of nerves. There is no point making ourselves nervous before a match," Mignolet said.

"We take each game as it comes and just focus on the objective. All we can do is our best.

"It's not about imagining winning the title, it's about doing it on the pitch. No-one is thinking about what might happen on May 11, we're just preparing ourselves for Chelsea.

"We know it's up to us. We need to look at ourselves, it's not about looking at the opposition."